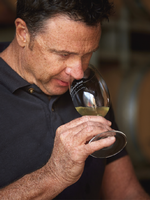 Cliff has been making world class wines in the Margaret River region for many years and comes to Flametree Wines after twelve years as Chief Winemaker at Voyager Estate.

Amongst a number of impressive accolades, Cliff was awarded Winemaker of the Year by Winestate Magazine in 2003, was a finalist in the Gourmet Traveller Winemaker of the Year in 2005 and has been a senior judge at the Royal Melbourne and Perth Wine Shows over a number of years. Langton's Master of Wine, Andrew Caillard, said "Winemaker Cliff Royle is regarded by critics as one of the most gifted winemakers of his generation."

Cliff comments "I think Margaret River is without doubt the number one premium wine region in the country and consistently produces benchmark wines made from the classic grape varieties of Chardonnay, Cabernet Sauvignon, Sauvignon Blanc and Semillon. The aim at Flametree Wines is to make a range of wines that play to the strengths of the region and consistently deliver a great drinking experience at any price point. Margaret River wines should exhibit the hallmark characters of structure, perfume and elegance that has made this region famous."

The Towner family are very excited about Cliff's appointment and believe he has all the credentials required to take the business to the next level in its evolution.